An Illustrated Guide to Identifying Genuine CHANEL Earrings Made in France

Most collectors know there are many, many earrings that have been counterfeited when it comes to Chanel designs. In fact, avid collectors run across more fake earrings than any other type of reproduced Chanel. Some of them are more obvious fakes (see illustrations below), and others are copies that look pretty close to the originals. People buy them from street vendors or flea markets, or perhaps order online, knowing they’re fake. They want the look without the high price, often overlooking the fact that they’re buying counterfeited goods that are being peddled illegally. Then, when they’re subsequently sold at a garage sale or donated to a thrift store and passed from hand to hand, the story of authenticity gets lost and an unknowing buyer suddenly believes they’ve found a treasure for a song.

It’s also been reported by industry insiders that some Chanel pieces were manufactured by a well-known New York company in the 1980s and given to employees by Chanel. The earrings falling into this category do not have the quality of pieces made in France and sold in Chanel boutiques at that time. But are they fakes?

Technically, if they were commissioned and licensed by Chanel they are not fakes. But the conflicting stories about the origin of these earrings and the lack of response when the House of Chanel is questioned regarding these pieces paints quite a gray area for collectors and logo enthusiasts who just want to own the real deal. Because these pieces do not have the beautiful quality of other Chanel jewelry and use some inferior components found in pieces deemed to be fake, these get lumped in with all the inauthentic pieces in terms of what is collectible.

What it really boils down to is that someone buying Chanel earrings, and investing a good sum to get them, wants a pair that was crafted for the fashion house in France (or in Italy in the early 2000s) and sold in one of their boutiques, not cheap knockoffs of any origin.

There are certainly exceptions to most rules, so looking at the overall quality, construction and how a piece is marked is paramount in determining Chanel fakes or knockoffs. As with most identification processes and honing of expertise, the more authentic and counterfeit pieces you examine first hand, the more adept you will become at determining which is which.

With that said, there are some general characteristics of Chanel earring copies to look out for:

1) Poorly Formed Marks – Molds for many counterfeits are made by pressing the back of the earring into molding material, a traditional technique used for manufacturing knockoffs. The result is either a mark that is very illegible when magnified, or one that is clearly misshaped, and sometimes both. Genuine Chanel marks are almost always very clearly legible when magnified.

2) Lack of Marks – Many Chanel fake earrings have a CC logo somewhere in the design visible from the front, but they do not have a mark present anywhere else. Applied signature plates can fall off of Chanel pieces, especially on pieces made during the 2000s. But most vintage and collectible earrings from the 1970s through the ‘90s will have one of a number of different Chanel marks present whether incised into the earring or on an affixed cartouche or plate.

3) Worn plating – Genuine Chanel earrings will be plated using many mils of gold or silver. Even when they were worn repeatedly by the original owners, the finish holds up nicely and has a quality look to it. Fakes are thinly plated and often show wear not only on the backs, but on the high points on the fronts as well after minimal wearing.

4) Flat Clip Backs – Very flat clip backs, like the ones shown in the examples of fakes accompanying this article, were not used in production of jewelry made in France by the House of Chanel. These clip backs, which can be found on many lesser brands of jewelry, are a quick tip-off that you’re looking at a piece that was never sold in a Chanel boutique.

5) Light Weight – Authentic pieces made for Chanel and sold in their boutiques, especially pieces with marks dating them from the 1970s through the 1990s, were made with heavy base metal and thick gold plating. They will have a thickness and weight to them that many counterfeits do not possess.

6) Low Price – Be very wary of anyone offering “authentic” or “genuine” Chanel at a low price. Most reputable vendors who know what they’re selling will try to get a decent sum for their wares. That’s not to say you won’t find a bargain from time to time, but extremely low prices are indeed a red flag.

Earring Examples (click on photo for a larger view): 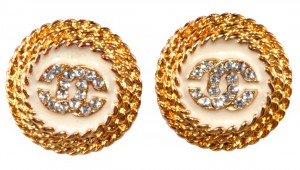 Example 1a Front – This pair of fakes actually looks fairly nice from the front, but examining the backs reveals that these are not authentic Chanel. Example 1b Back – There is evidence that a mold for this cast pair of earrings was made by removing a clip back and impressing the earring into the molding material. There are little oval bumps at the bottom and near the post that would not be there if these were finely crafted Chanel pieces made in France. The mark was also impressed into the mold material and is thus poorly formed and nearly illegible under magnification. Example 1c Mark – Many elements of this mark found on Example 1a are illegible, including the CC logo. Most all Chanel marks on genuine pieces will be clearly readable under magnification. Example 2b Back – These have a clip back that Chanel never used on authentic pieces made in France. They are also very light in weight and do not have the feel of authentic Chanel. The plating is worn as well, and Chanel used such thick gold plating that it rarely wears off in this manner. The absence of a signature cartouche on both earrings is also an indicator that they are not genuine Chanel. Example 3a Front – These are actually good copies when judging solely from the front view. Example 3b Back – Examining the backs show they have the wrong style of clips and the texturing on the back is not indicative of Chanel made in France pieces. Also, a signature cartouche is not present on these earrings. The small plaques can sometimes fall off, especially on pieces made in the 2000s, but you will rarely find them missing from both earrings.

Example 4a Front – These are authentic Chanel earrings. Note the fine finishing and detailing, along with the high quality pearls.

Example 4b Back – These are the backs of the earrings shown in Example 4a. Note the finishing, quality plating, and legible oval signature plaques. Example 5a Front – These are the inferior copies of the pair shown in Example 4a. The overall quality is not up to par.

Example 5b Back – Note the poor quality of the molding and the finishing, and incorrect marks that are barely legible in comparison to those shown in Example 4b. Example 6a Front – These are authentic Chanel earrings in a style that has been widely copied as shown in example 7a. Example 6b Back – The backs of these authentic Chanel earrings show clear marks and a correct curving clip back. Example 6c Mark – This is the authentic Chanel mark on Example 6a, which is defined and clear. It is also on a plate attached to the earring. Example 7a Front – These are copies of the earrings shown in Example 6a. They are good copies, but sometimes show plating wear on the high points. Example 7b Back – The backs show that the incorrect clip style was used in construction. The marks often look pretty good to the naked eye, but are rough and shoddy under magnification. Example 7c Mark – This is the mark on Example 7a, which is not on a plate and very sloppy under magnification in comparison to the mark in Example 6c found on an authentic pair in the same style.

Photographs by Jay B. Siegel; Copyrighted © by CJCI